Due to a misuse of a word joke on live TV broadcast, girl group otaku, 'Jin-Kyung' ended up becoming doxxed and labeled as a "child predator", and ended up getting Social Anxiety Disorder. 3 years later, because of his past incident from the 3D world, his love for only the 2D world manifested, and ended up becoming a "Shut-In Otaku"! Then one day, as Jin-Kyung was no-lifing as usual, he was summoned to ‘Another World’, and came face-to-face with a bright-eyed, hopeful Summoner… Interesting enough, in the world that Jin-Kyung was summoned to, his Social Anxiety Disorder disappeared, and he was also able to wield immense power, and became the strongest summoned being there ever was!! The story of a former girl group otaku turned powerful 2D otaku, and the story of a weak and feeble Summoner commences now!!! 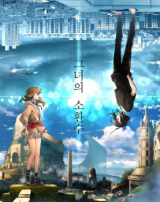